A fantastic time at the ‘Tour de York House’

Here at YHL parks, we had a fantastic bank holiday weekend celebrating not just the extra day off but also the Tour de Yorkshire and our very own ‘Tour de York House’ – all while raising money for a local charity.

Although the race didn’t pass directly by our door this year, there was still be plenty of opportunity to watch the cyclists whizz by, with the route winding its way through nearby towns such as Ripon, Harrogate, Bedale, Whitby, Scarborough and the Yorkshire Dales.

And York House Holiday Park near Thirsk got in on the action more than most as park manager John Reay once again donned his lycra to take part in an 18-mile bike ride setting off from the site on Saturday, May 4.

The event raised just over £400 from the bike ride, a race night, raffle and donations. The money will be donated to local charity Freddie’s Fight, which is trying to raise £250,000 to send three-year-old Freddie Thompson to America for pioneering treatment for to battle his aggressive neuroblastoma. 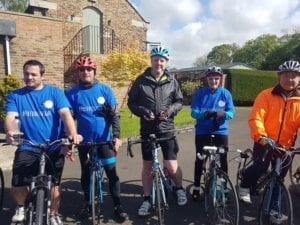 Despite inclement weather at first, the hail and rain was soon replaced by sunshine, and 13 riders comprising three women and ten men of various ages and abilities gathered for the ‘Tour de York House Bike Ride’. Setting off from York House as well as our other sites Old Hall Holiday Park and Swaleside Holiday Park, the riders took a route through the North York Moors passing Dalton, Topcliffe, Busby Stoop, Thirsk and Sowerby, including a pit-stop for refreshments.

First over the line was Carl Robinson who completed the course in one hour, five minutes.

John Reay, park manager at York House, said: “We enjoyed last year’s Tour de York House bike ride so much that we wanted to do it again this year. Shout outs to everyone that took part, especially to Sue Watson who came along instead of taking a well-earned rest after competing in a duathlon the previous weekend, to Gary and friends who joined us on the bike ride from Swaleside, and to our more senior cyclists Trevor Lord and George Row from York House who definitely showed us youngsters how to do it!

“It was also great to see so many of our residents as well as local people turn out to support us on our ride, and to take part in the rest of the day’s activities.”

To find out more about Freddie’s Fight, click here.