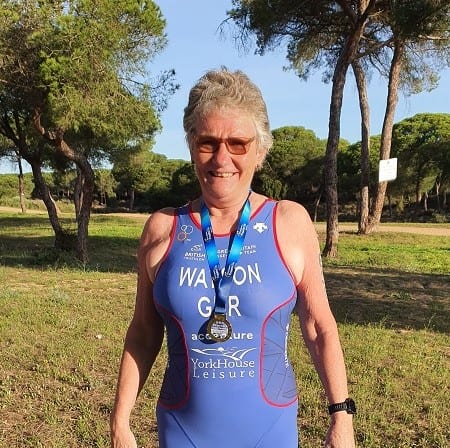 Abbots Green lodge owner Sue Watson has been crowned the European champion in the sprint duathlon after competing in Spain at the weekend.

Sue took the gold medal for Great Britain in the ETU Duathlon European Championships for the women’s age group 65-69. The competition, in Punta Umbria, Spain, saw her run 5km, cycle 20km and then run a further 2.5km in an amazing one hour, 26 minutes and 56 seconds.

Her time is a big improvement on her performance last May during the World Championships in Pontevedra, when she came in fifth position with a time of one hour, 37 minutes and 20 seconds. It means she’s on course to do even better on the international stage later this year.

Here at York House and Abbots Green, we’ve been following Sue’s progress both as her friends and because YHL Parks has been honoured to sponsor her GBR kit for the last two years. Elite athletes such as Sue rely on sponsorship to help pay for their kit, equipment and travel.

In her email to us with new of the European Championships, Sue said: “I carried your logo with pride. Thank you for your support.”

We’re delighted to hear about Sue’s latest success, which is even more remarkable when you discover that she only took up the sport less than three years ago. In addition, last year’s World Championships was the first time she had represented Great Britain!

York House park manager John Reay said: “Huge congratulations to Sue. She’s an inspiration to us all here at the holiday park, and we’re delighted that YHL Parks is able to help support her on this amazing journey.

“We can’t wait to see her gold medal when she next visits Abbots Green!”