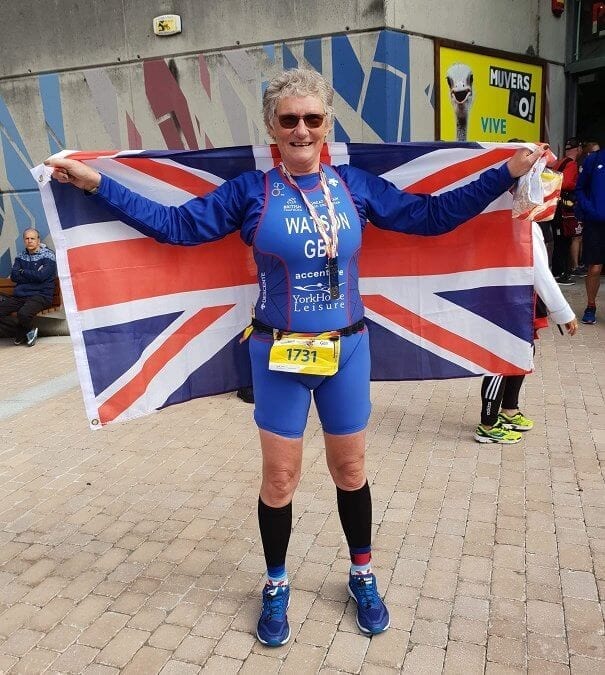 We have a great relationship with all our holiday home owners and guests across our holiday parks in North Yorkshire.

So when Abbots Green lodge owner and duathlete Sue Watson approached us for sponsorship for a major sporting event she was competing in, we were delighted to help.

Sue, 65, took part earlier this month in the ITU World Championship sprint duathlon in Pontevedra, Spain. Amazingly, she is now ranked among the world’s elite after coming fifth in her age group in the championship. Her achievement is particularly astounding when you consider that she only took up the duathlon 18 months ago, and the Pontevedra race was the first time she had represented Great Britain. She ran 5k, cycled 20k, then ran 2.5k in one hour, 37 minutes and 20 seconds. What an inspiration!

YHL Parks were proud to sponsor Sue’s GBR kit, and look forward to her future successes. We’ll keep you posted!

And just when we thought she might be taking a well-earned rest, Sue then took part in our very own cycle race to celebrate the Tour de Yorkshire, only a week after competing in Spain. It may have been a lot more leisurely than her previous race, but we still appreciated her support!

John said: “We were delighted to support Sue with the sponsorship of her GBR kit. Without sponsorship, it’s difficult for elite athletes to pay for all the training, equipment and travel that is needed to compete at world championship level. Sue is an inspiration to us all and deserves every success.”